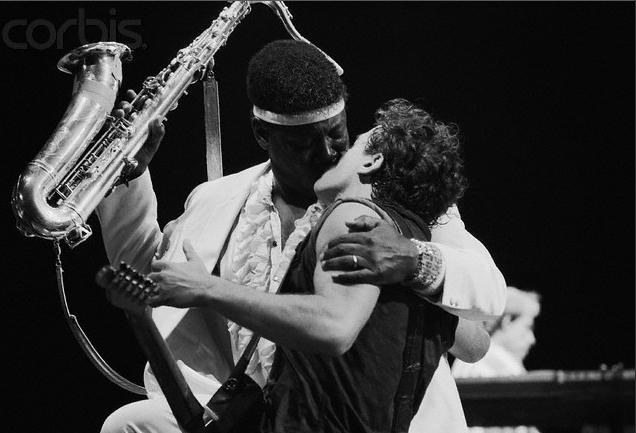 There are two albums that really are the first that I remember as having a real impact on me. One of them was Dire Straits Brothers in Arms. The other was Born in the USA. I wore my parent’s cassette of that one out the summer of 1985(?). And The Wild, the Innocent, and the E Street Shuffle was one of the first albums (well, cassette really) I ever owned. So it’s fair to say the news that Clarence “Big Man” Clemons died hit me.

Now I won’t say that I had a huge connection to the band. I never really was indoctrinated in E Street lore, and there was an extended period of time when I basically forgot about them. However, as is always the case, I came back to them. Replaced long-lost cassettes with CD’s, even added to the collection. All leading up to actually seeing the band perform in early November of 2009 at the Palace of Auburn Hills — sadly to most people the concert is most notable for Bruce having a “Spinal Tap” moment in the beginning of the show and repeatedly saying “Hello Cleveland”. It was a tremendous rock show, they played the entire Born to Run album that night — an appropriate choice for Detroit. But the thing that really struck me looking back — other than the indefatigable spirit of Bruce — was how old the Big Man looked. It was obvious that he couldn’t move that well anymore, and you did get the sense that maybe this was the last time you’d get a chance to see the legendary — though diminished, since I believe Dan Federicci had already passed at that point — E Street Band in action.

So when I heard earlier this week that Clarence had suffered a stroke, I was saddened but nit surprised. Like I said, he looked frail two years ago. And I was saddened, but equally unsurprised to hear tonight that he was unable to recover from that stroke. It’s still hard to take, he was only 69 after all. And while it’s nowhere nearly as traumatic to me as LeRoi Moore’s passing, it still makes me feel like part of my childhood is gone forever. The Big Man is an essential part of who I am thanks to all those nights in my bed listening to Rosalita on my Walkman. I never was privileged to see the E Street Band in their prime, but they still left an enormous impact on me, and what I hold as good and true in music. We’ll all miss you Big Man, and thank-you for giving us perfect rock and roll.